You never knew that fermented spicy cabbage could have such impact, did you?

2) As one of Korea's national dishes, kimchi is considered one of the top healthiest foods.

3) You'll never want to buy store-bought after you make your own.

4) Fermenting may become one of my favorite new hobbies: Make something. Leave it alone. Enjoy it a few days later, better than it was before. Many things get better with time...not all things, but surely the best things...:)

So, per my usual non-measuring ways in recipe writing, I've jotted down the approximate amounts and the way I went about making this...you can hardly mess up kimchi. It's quite forgiving...and intensely rewarding! Try it!

(I made a double batch, so some of the pictures reflect double quantities.)

You'll need a large 1 gallon glass jar or container with a tight fitting lid. (I recently saved a giant whole pickle jar from Costco, and it works perfectly for a double batch.)

Wash cabbage and remove core and end. Cut remaining cabbage head into thirds, roughly 2 or 3-inch pieces. In a large mixing bowl, combine cabbage with the sea salt. Let cabbage sit for 30 minutes or so, while you prepare the other ingredients. Then pound with a wooden dowel or mallet, or simply use your hands to bruise the cabbage, and draw out the liquid. Drain off excess water pulled out from the salt.

Combine the rest of the ingredients with the cabbage, and massage the red chile powder into the cabbage, (yes, I said massage--how else do you describe it! :) ) and press firmly into the glass jar or container. You should have a few inches of space at the top of the container for expansion during fermentation. Close lid tightly, and leave undisturbed for 4 days before placing in refrigerator. The kimchi should be sour and fermented. 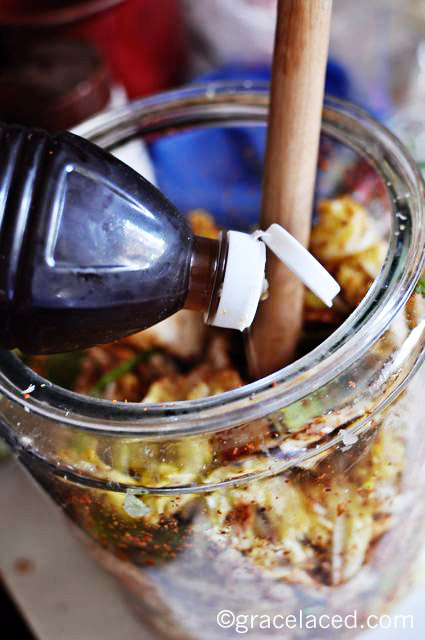 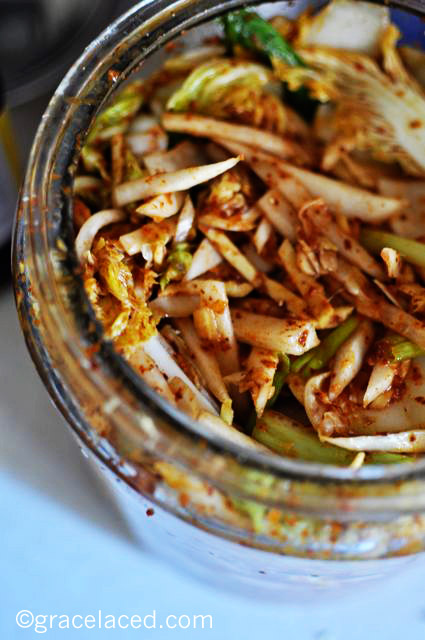 -Either mix altogether in a large bowl, or if mixing in a jar, combine in layers.

-To peel the ginger, simply use a small spoon, and scrape away from you down all sides of the piece of ginger

-I'm Chinese, so I tend to appreciate lots of slicing and dicing, and the texture of "pieces"...if you would rather grate or shred or food process everything but the cabbage, that's fine as well. :)

-You can eat the kimchi fresh and unfermented.

-Serve your kimchi with chapchae or bulgogi 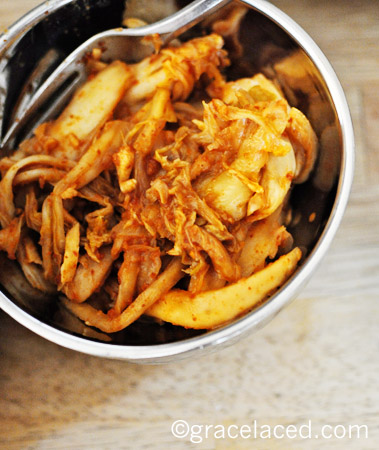 I'm no expert, but my method was simple (skipped a few traditional steps) and worked for me! Let me know if you have questions...and if you try it and like it!